Just lately on Facebook everyone seems to be doing pots within pots so I thought I would give it a try.
The first post I did was just a simple round ball type pot. This is the first side. I didn’t crop the picture because the only picture I have of the second pots resist. It can be seen in the background at the top.

Then this is side 2. The yellow is done and the green about to be done. 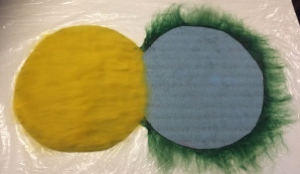 The idea is you cut holes in the green one. Then when you are done fulling, you push the yellow one inside the green one and you will see it through the holes. Side 1 has quite small holes and side two has the bigger ones. You need at least one hole big enough to pull the resist out. Sorry for the not so good Pictures. I did take some with my new camera but I am still trying to figure out how to sink it to my phone with Bluetooth so I can get it onto the computer. I should be able to use a USB cord to my computer but I have to buy the cord. 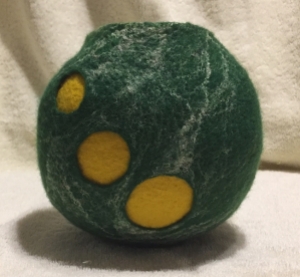 Here they are with light inside. My cheap fake tea light was pathetic in the amount of light it gave off so I popped in a LED flashlight.

I did a second pot that I quite like. I put some silk hanky onto the resist and then added the wool for the inside pot. 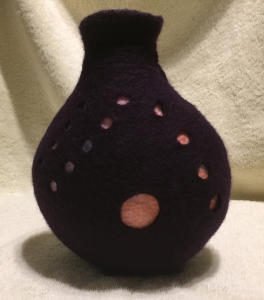 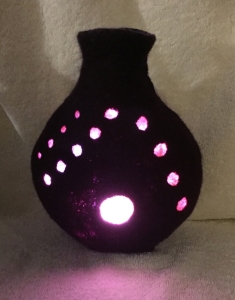 The first 2 are a success. The third was not a success. My idea was to make a cone as a night light. I thought to make the inside one smaller so you could have some holes with nothing behind them. It was a disaster. I could see it was not going to work quite early in the process. So I did not really take much care with making nice holes. 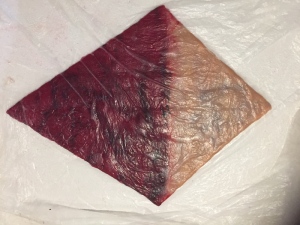 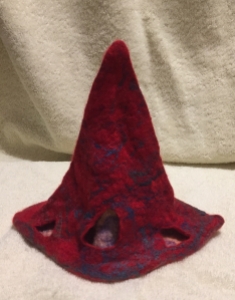 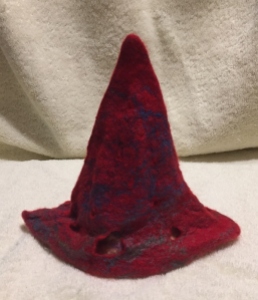 It looks like a demented gnome hat. There are 2 main problems. One is that I couldn’t figure out how to block the bigger one without squashing the smaller one. The other problem was that I would making something with a round base but when you do that with a flat resist you make the bottom edge curved so when you open it up it is flat. There was no way to do that with the double resist. I did try to stretch the middle bottom to make it longer but I just deformed other parts. I think next time I will try for a pyramid with a book resist. I have some other interesting ideas to experiment with too. The problem with pots is they do not seem to sell well and I only need so many decorative pots. its not as fun to play if you think you are just going to toss it in a box when your done.

This site uses Akismet to reduce spam. Learn how your comment data is processed.